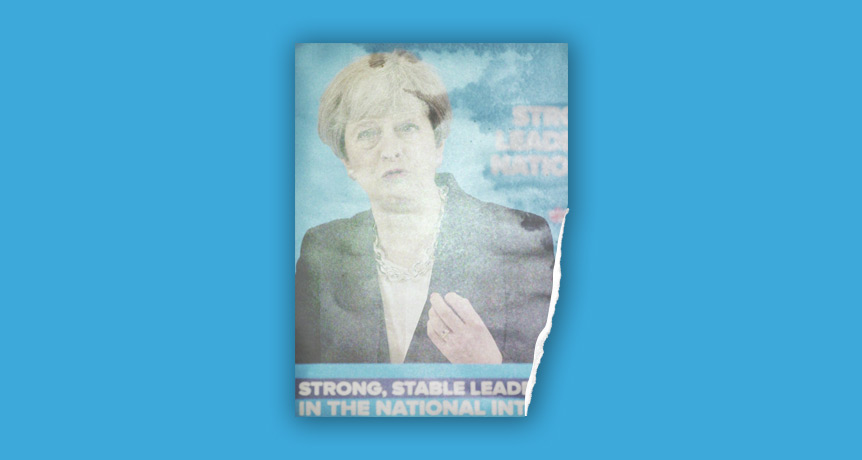 There was a point when the public saw Theresa May as the new Iron Lady. Her brand was ‘Strong and Stable’, and she was set to win biggest Tory landslide since Thatcher (according to some papers). In less than eight weeks of campaigning, she managed to become more unpopular than a toothache. What happened since the snap election to the 8th of June?

She Killed her brand.

When she won the Tory leadership and became the prime minister, one of the first things she said that she wasn’t going to call a snap election. If that was in March, in April was announcing a snap election.

The General Election is possibly her most famous U-turn, but in her short mandate has actually changed her mind several times, to mention a few: Self-employed National Insurance, the number of children refugees or the foreign worker quotas.

A brand must be consistent. If you change your logo or your colours in short periods, people won’t be able to know you and engage. The changes have to be gradual, so your customers have time to understand and digest the change.

In Theresa May speeches she kept saying how Tories would fight to help the poor. But when it came to implementing the policies that would help the people who live in poverty, she actually didn’t even bother lying in the manifesto. The ‘dementia tax’ was one of the cruel examples of how she cared for the poor.

Lesson to learn: BE COHERENT

A brand has to be honest and meaningful. If you lie to your customers, you will only get one sell (if you do) and an angry client that will not only avoid recommending your services but they might write bad reviews and tell people how horrible your brand is (and most likely that it will be exaggerated). The opposite if that is loyalty.

Theresa May hates people. I don’t know for certain, but it’s the impression I have when I look at her behaviour in the public events. She always has ready a robotic speech with no chance to have a discussion what she says. While Jeremy Corby campaigned in the streets, she refused to appear in the debates.

Lesson to learn: BE HUMAN AND HAVE A PERSONALITY

A brand has to be human and have its own personality. Doesn’t matter if it is a personal brand or a companies brand. People buy from people and now more than ever in a world in with savvier customers.

Branding has changed massively in the past few years. We live in a connected world where brands have to respond in real time and have to pay attention to their customers. They have to be personal and more than anything else engage with their audience. Theresa May underestimated the voters and her competition, in a superior attitude that not only didn’t pay off but made her ‘weak and wobbly’.

Trump, Brexit and other lies

Seven mistakes to avoid in business